What we're reading in TLS this week:

Check out all the new fics on our rec list this week!!  We LOVE seeing all these writers giving us new words! As always, be sure and leave them some love in the form of a review and let them know where they were recommended. Happy Reading! Stay safe out there!

Beauty Takes on the Beast by ericastwilight
https://www.fanfiction.net/s/12608146/1/Beauty-Takes-on-the-Beast
I was about to break a promise to watch out for my best friend's baby sister. I was the worst thing that could ever happen to her, but I wasn't about let that stop me from having my Beauty. Third place winner in the public vote for the BDE Contest! Rated M

Divergence of Nature by Maplestyle
https://www.fanfiction.net/s/13628194/1/Divergence-of-Nature
There is a long-standing debate over nature versus nurture. For the Cullens and the McCartys, it’s one they discover changes their lives irrevocably. Rated M

Flowers for Strangers by Olivejuice26
https://www.fanfiction.net/s/13616990/1/Flowers-for-Strangers
Edward often visits his grandad's grave, but notices the neighboring grave of a young man always remains bare and unkept. He decides to leave flowers on the grave, which leads him down a path of tragic discovery and a chance meeting with a beautiful, young stranger, who may end up being what his life was missing. AH, Older Edward/Younger Bella Rated M

Kiss Me, You Idiot by iambeagle
https://www.fanfiction.net/s/13426171/1/Kiss-Me-You-Idiot
A story about falling in love with your charmingly idiotic roommate. Rated M

My Perfect Asshole by MrsK81
https://www.fanfiction.net/s/13615794/1/My-Perfect-Asshole
Reluctantly single, super reserved and a bit of a geek Edward meets polar opposite, Bella and she knocks him off his feet. Will he ground her or will she show him how things are in her world! AH fic from EPOV. Something relatively light hearted to help get me back into my groove... it has been missing for too long now! Rated M

Six Degrees of Separation by aushapasha
https://www.fanfiction.net/s/13616574/1/Six-Degrees-of-Separation
After one more break up, Bella Swan decides to finally take her best friend's approach to breakups and relationships in general. Can she clear her mind in six steps and get perspective to realize what she truly wants? Fluff, drabbleish. Rated M

Taste of Ink by Hotteaforme
https://www.fanfiction.net/s/13621452/1/Taste-of-Ink
This summer was going to change everything. We just weren’t prepared for how much… Best friends navigating the ups and downs of their last summer before college. Rated M.

The Experiment by Edward’s Eternal
https://www.fanfiction.net/s/13378811/1/The-Experiment
Edward is part of a sociology experiment offering free hugs. What happens when the shy girl he's noticed before ends up in his arms? Rated M

Third Time’s the Charm by Sukiethree
https://www.fanfiction.net/s/13617683/1/Third-Time-s-the-Charm
Left pregnant and alone, Bella delivers a surprise to the paramedic who knocks on her door. My entry for The Perfect Date Contest. Rated M

Welcome to What-A-Burger by jane-with-a-y
https://www.fanfiction.net/s/11007954/1/Welcome-to-What-A-Burger
A lover turns predator. A young Professor, his prey. Follow Dr. Swan as she goes on the lam. She’s lost, scared, and completely alone. When her truck breaks down in a rural NC she’s rescued by two crazy waitresses with hearts of gold. But will their friendship, and the love of a simple man, be enough to save her? "We ain't Flo and Alice, hun, but we're all you got." Rated M

The Lemonade Stand has spent so many years bringing you the best the Twilight fandom has to offer, and we are very excited to have the chance to offer you even MORE. We've watched stories grow and develop from first post through COMPLETE, and now we're lucky enough to share previews of the stories that will soon be your new addiction.

For this week's Sneak, we are happy to have Maplestyle, author of Love Hurts, Flipside, and Free Fallin'. Her upcoming fic, Divergence of Nature is sure to be a topic of fic discussions for weeks to come! 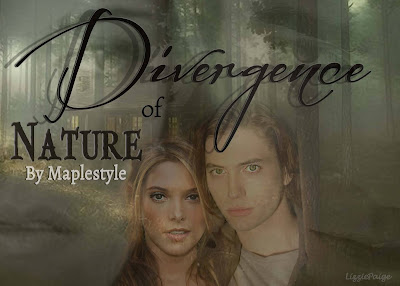 
Divergence of Nature by Maplestyle

Summary: There is a long-standing debate over nature versus nurture. For the Cullens and the McCartys, it’s one they discover changes their lives irrevocably.

I have been writing this story on and off (mostly off, to be honest) since 2016. It started with a conversation with a friend about the nature of DNA and how our DNA can shape us as people. How a person who doesn’t drink alcohol can still crave it because they come from a long line of alcoholics, and that made me think of criminality. Violence. Are two people, created from the DNA of violent people, destined to be violent just because their biological ancestors were violent? What if they were raised in healthy, normal households? Would they still be violent? And so, my original story Nurture was born, pardon the pun. Lol But, over time and a lot of words and creative license, the story has morphed into a more complex tale, now aptly titled: Divergence of Nature.

I donated the prologue for this story to the Babies at the Border Compilation in October 2018, with the promise I would not post it on FF.net until the story was complete. I can finally announce that the story is completely written and I will start posting it! Read on for a special Sneak Peek.

After the prologue, the story begins with two families, the Cullens and the McCartys, trying their damnedest to have a family, despite all the obstacles in their ways..

Both Esme and Carlisle stood, smoothing the wrinkles out of their clothes in a nervous gesture, and followed the receptionist to the room.

Dr. Aro walked in less than a minute later and gave them the news. Carlisle’s sperm count was low, so low he was afraid they wouldn’t be able even to use his sperm for the IVF treatments they were enquiring about. Carlisle and Esme had discussed the possibility of that happening, and what they would do if either of them were unable to contribute to the IVF. They had decided in either case they would use a donor, be that eggs or sperm, and that would be okay. So, they informed the doctor of their decision.

Dr. Aro wrote Esme a prescription to prepare her body for the IVF, and sent them on their way with an appointment the following week for the implantation process to be done.

Then, several months later and halfway across the country, the other family enters the story:

Rosalie and Emmett McCarty were nervous. This was their last shot at being parents in the most natural way they could. They’d tried IVF twice now, and the doctors had told them it was their last chance at attempting that way. They didn’t want to put too much strain on her body, they said, and she could understand that. She was exhausted already, and the procedure hadn’t even been done yet.

This time, they had been encouraged to use donor eggs.  ...

When they were called to the back, Rosalie’s heart pounded nervously. She was desperate to have a child.

So the divergence of nature begins, and two new lives are created. But little do these families know, that when those dreams become a reality, they will get a lot more than they bargained for.


The prologue will post tomorrow (Sunday, June 28th), with the new chapters posting weekly every Sunday. So, put Maplestyle on alert, and find out what happens when nature battles nurture.
Posted by Six Dlbfive at Saturday, June 27, 2020 4 comments

The Lemonade Stand has spent so many years bringing you the best the Twilight fandom has to offer, and we are very excited to have the chance to offer you even MORE. We've watched stories grow and develop from first post through COMPLETE, and now we're lucky enough to share previews of the stories that will soon be your new addiction.

This week we are super excited to feature newer writer Hotteaforme, author of the recently completed White Noise. She's sharing a peek of her upcoming fic Taste of Ink. 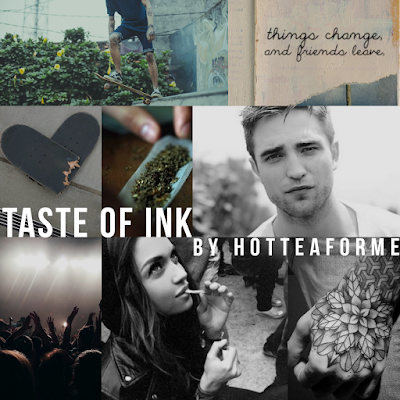 Taste of Ink by Hotteaforme

Summary: This summer was going to change everything. We just weren't prepared for how much... Best friends navigating the ups and downs of their last summer before college.


Hi! Back with something a little different (for me). 2006. MySpace, gigs, boys on boards, weed... what's the worst that could happen?

Rose is making eyes at me, and I don't understand why until her nails are digging into my arm painfully tight. She lets go as I look at the crescent moons imprinted into my skin.

"Behind you," she whisper-shouts into my ear just before the mellow track erupts into something else entirely, much to the delight of the crowd.

People jump, hands in the air.

I glance behind me.

Standing there, as if that's exactly where he's supposed to be, is Tattoo Guy. Our eyes meet and I manage a smile before whipping my head back round to the stage. Then I do that thing people do when they see someone they know and steadfastly ignore him.

Heat creeps up my spine, on the back of my neck.

What is he doing here?

I lean into Rose. "What the fuck?"

She cups her hand to my ear so I can hear, and then she says three words I really wasn't expecting...

If you want to find out more about Tattoo Guy be sure and put Hotteaforme on alert. Taste of Ink begins posting today, June 20,2020.
Posted by Six Dlbfive at Saturday, June 20, 2020 3 comments


FLASH FIC FRIDAY IS BACK!

A big shout out to all those who flashed us in May!

With all the craziness going on in the world, we wanted to bring some of the fun back from the fandom heydays with Flash Fic Fridays.


What’s a Flash Fic?
Basically it’s a spur of the moment, scene or story prompted by gifs, pictures, words, or quotes.

How does it work?
On Flash Fic Friday, TLS will post a picture prompt to the blog. Using the image, we are asking writers to submit 100-300 words ONLY – no more, no less. Please leave your submission in the comment section at the bottom of the post using this format:

Is this a contest/competition?
No, but we are hoping to inspire words from writers and smiles from readers during this period of social distancing.

Give us some dirty words with a side of sizzle. Make us swoon from sweetness. Or if you love angst, make it hurt so good.

Here’s the prompt I selected for this week. Make sure to incorporate it into your submission:

NOTE: If you are unable to hit publish, try changing your browser. Blogger doesn't seem to like Safari, or Chrome. Firefox and Internet Explorer seem to work best. Chrome can be used if your switch to private or incognito mode.
Posted by Six Dlbfive at Friday, June 19, 2020 17 comments

TLS wouldn't be able to function without guys- All of your time spent is forever appreciated. I love you all.
Love,
PAWsPeaches

Check out new stories in the TLS Nursery

Get Your One Shots Here

Monthly updates to our archive of the hottest single servings in the fandom. PAW and The Dick Meet up